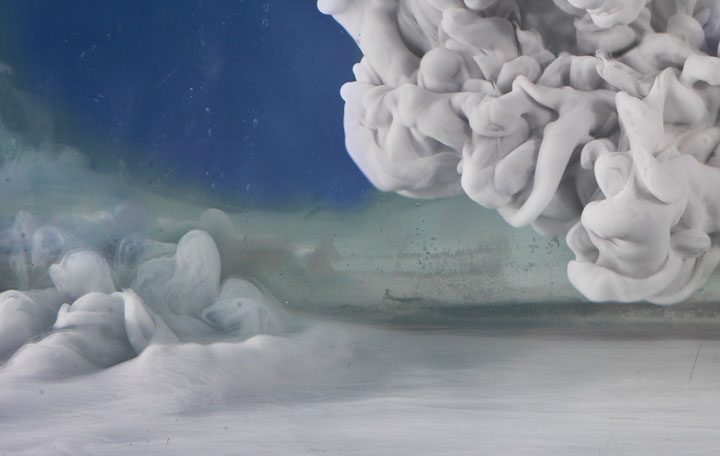 I always remember one day in high school English class. That day, the teacher spoke about a Master artist. I always loved making art and there was such reverence in his voice it made me believe I would love to be a Master. It was one of those rare epiphanies one has. I couldn’t remember ever feeling that way about becoming someone of any importance. I had no direction in my life and high school was just a day-to-day obligation I had to fulfill. After high school, I left Chicago and moved to Virginia to live with my father. He talked me into going to college. I decided to be an engineer but not for the right reasons. I didn’t have any real interest. I thought I would make my fortune, retire and go back to my art.

It wasn’t until finishing my undergraduate engineering degree and getting most of my master’s degree that I realized I was not going to finish school but go directly into being an artist full time. I had watched a video of Picasso painting on clear plexiglass with the camera on the other side of the plexiglass so that you could see him make the brushstrokes, and also see the expression on his face. He was in his mid-80s and he looked so incredibly happy it made me think that if I lived to that age, I would also be totally happy as an artist. I knew that the only way I could reach that goal was to become an artist immediately. It also dawned on me that I would’ve been miserable as an engineer and eventually would totally regret the decision. So much to the school’s distress, I set out on the life of an artist.

My father and various relatives had always discouraged me and though it didn’t make total sense to me at the time, I eventually came to realize what they meant. Unless you are very serious and prepared to live a relatively impoverished life, it is truly a difficult venture. This is assuming you don’t have the means to support yourself through your family or otherwise.

So in a relatively short time I sold a house my father had left me, imposed on my best friends to help me move to New York and went from there. Finally after a long struggle I am beginning to realize true success. I kid my friends, “not bad for 50 years of trying.” Though I obviously wasn’t an overnight success, I made the right decision for my life. And as far as I know, there’s only one life you really know about and that is the one you have now.

I was lucky enough to find a co-op apartment in Manhattan that I paid a pittance for. It was big enough to live in and still have a decent sized studio. This was in the early 80s when most of Manhattan real estate was really not very valuable and the typical phrase used by most people was, “it’s a nice place to visit but I wouldn’t want to live there.” During my first years in New York I was mainly a painter though I made many other forms of art including printmaking, drawing, sculpture and black and white photography.

And as far as I know, there’s only one life you really know about and that is the one you have now.

My paintings related heavily to Picasso, Matisse and surrealism. The subjects were generally figures in the landscape. They were well accepted in the East Village art scene but I didn’t feel like I was making anything ground-shakingly new. My last paintings related to geology and cross sections of earth as a result of being in Ecuador for five months and seeing the unusual landscapes in the Galapagos Islands. A few years after that I became very bored with painting and started thinking about something new. 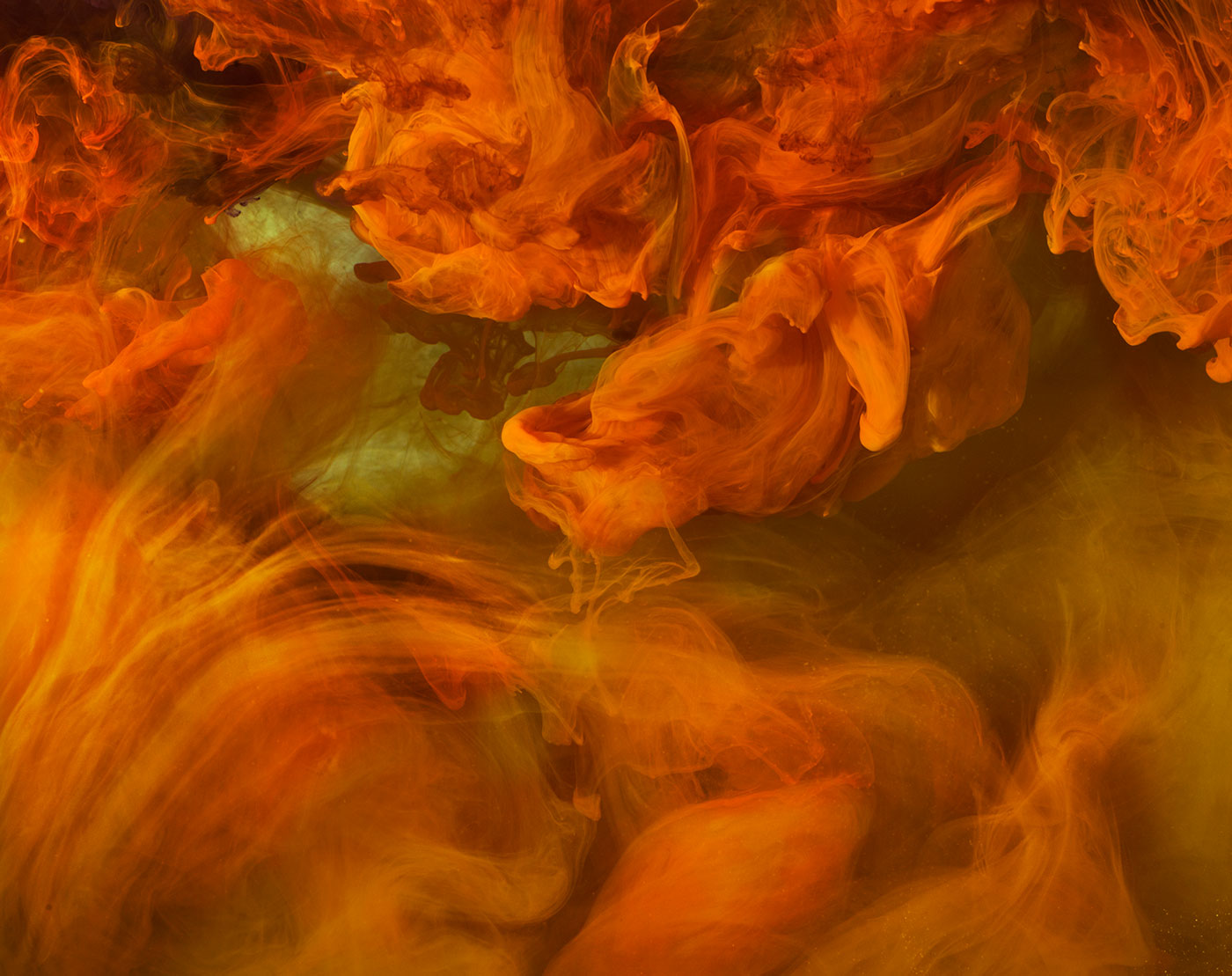 I always admired the very personal photographs by Cindy Sherman. Though they couldn’t be much more personal since they were photographs of herself, it was a certain essence that she captured in the process that made me feel like revisiting photography. Instead of photographs of myself, I decided to make models of landscapes and photograph them. As a child I was mesmerized by the sunsets at my father’s house on the Eastern Shore of Virginia, which looked over a beautiful estuary with pine trees and sawgrass in the distance. I would stand there in the glorious evening light until the mosquitoes would drive me inside. So for me, the landscape has always been extremely personal.

I started by building a large table and constructing plaster and newspaper mountains. I originally had a painted background with various lights around the table. They looked more like paintings in the photographs but the main problem was that I couldn’t get any atmosphere so everything looked like a landscape from Mars. I eventually partially solved this problem by building a light framework over the table and covering it with clear plastic. I would then add smoke bombs and lit cigarettes to the inside and start photographing. On one occasion there was so much smoke coming out of one of my windows that an alarmed neighbor asked me if everything was all right. This idea worked for a while but I was still only getting a kind of fog so it wasn’t quite satisfying.

He would always show me when he poured the two together and I would watch the beautiful clouds it would make in the glass. 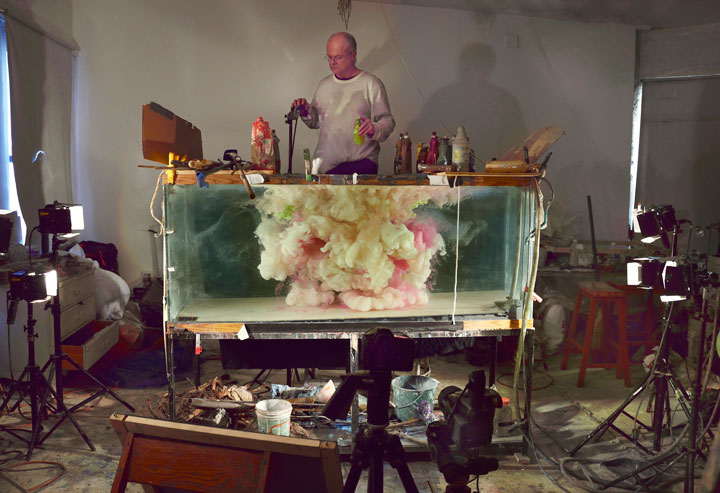 As it turned out, a friend of mine was throwing out a 100-gallon aquarium. As a child, my father would mix canned milk with water when fresh milk was not readily available. He would always show me when he poured the two together and I would watch the beautiful clouds it would make in the glass. (I suppose the idea was to distract me from the taste but I can’t say it worked. We actually had a real milk cow but it had some illness so it wasn’t able to give milk.) Anyway, it made perfect sense to build landscapes out of plaster and put them in the tank, fill the tank with water, and add paint to make clouds. I still use this idea though it presents its own problems. I have walked out of the house on several occasions with the water running in the tank. My 200-gallon water tank flooded the neighbors downstairs three times. They were polite the first couple of times but the third time I had to pay for a ceiling.

This discovery was a true turning point in my work. I continued making landscapes for many years and eventually expanded my idea to make several series of heads and figures, a bird series, and several abstract series. Everything was photographed through the wall of the aquarium filled with water.

Several years ago I started thinking about simplifying the whole idea by just putting paint into water and seeing what happened. At first I didn’t realize it, but the whole process gave almost random results. I could choose the colors to use and the placement of the paint in the water, but the results were always totally surprising. I had created a machine, so to speak, that was giving me random results.

Saul Lewitt said the idea becomes a machine that makes the art. He was speaking about conceptual art. He also said that conceptual artists, “leap to conclusions that logic cannot reach.”

There has always been some talk of my work on a conceptual level. Though the landscape photographs generally look like 19th century Hudson River School paintings, the use of very simple materials always gave them a conceptual edge, but I think the new work is even more conceptual, at least in relation to Saul Lewitt’s ideas. The idea has become a machine that makes the art. 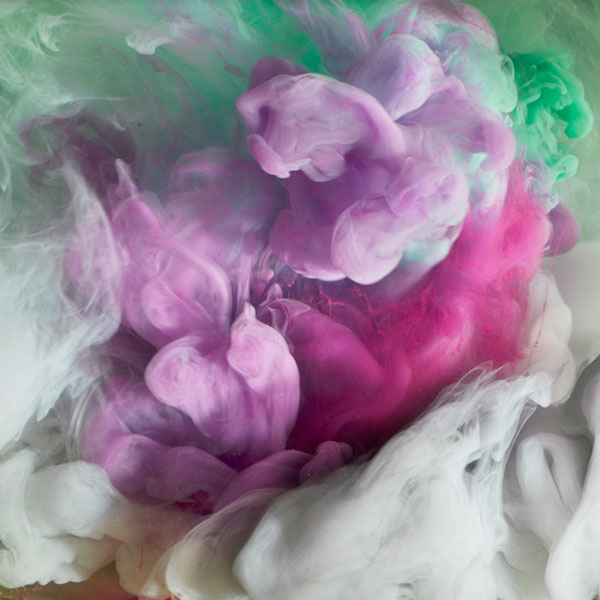